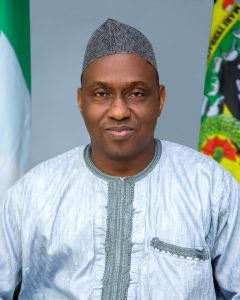 Mohammed Bello Koko was born on 25th March 1969 in Koko-Besse Local Government Area of Kebbi State. He attended and completed his secondary school education at the Federal Government College Sokoto in 1986. He then proceeded to the Usmanu Danfodio University, Sokoto for his bachelor of science (B.Sc.) degree in Management Studies and Master’s degree in Business Administration (MBA) in 1992 and 1995 respectively.

Imbued by his penchant for continuous learning, he proceeded further to the Harvard Kennedy School, USA where he bagged an Executive Certificate in Public Leadership.

He joined Zenith International Bank Plc in the year 2005 where he grew at various times to be Branch ahead, zonal Head Public Sector and also Large Corporates from where his exceptional contribution to the bank’s globally referenced profitability and balance sheet in the period 2005 to 2015 earned him numerous awards in the bank and a spot in the bank’s Executive Management Team as Deputy General Manager and Zonal Head.

In the year 2016, Mohammed Bello Koko was appointed by President Muhammadu Buhari as Executive Director Finance and Administration of the Nigerian Ports Authority (NPA), a role he held with distinction till May 2021, when he was appointed Acting Managing Director.

His sterling performance as acting Managing Director evidenced by plugging of income leakages, unprecedented growth in revenue and improved operational efficiencies that led to significant increase in container traffic to Onne Port and the demonstrated resolve to open up the Eastern Ports of Warri, Calabar and Rivers convinced President Muhammadu Buhari to confirm Koko as Managing Director of the NPA on the 15th of February, 2022.

Bello Koko who is a fellow of both the Association of National Accountants of Nigeria (ANAN) and the Institute of Strategic Management (ISMN), is also member of the Nigerian Institute of Management (NIM) and has attended several domestic and international trainings.

Adenrele Adesina, FCCA was born in London, England to Mr Kolawole Adesina and Mrs. Olusola Adesina, both natives of Ogun State. She attended Hockerill College, Bishop’s Stortford and Chigwell School, Essex for secondary education before proceeding to the University of Brighton, East Sussex, graduating with BA (Hons) Accounting & Finance in 1995. Immediately after graduation, she began her professional career working in Finance for Woolworths plc, a large UK retail group. She moved into banking in 1997, working with WestLB AG in London, as a Product Accountant, focused on Treasury products, notably government securities and completing her ACCA exams the same year.
In 2000, she began her career in Research and became a credit research analyst, analysing the European corporate bond market, writing research and advising clients. Her initial focus was on the Retail sector, extending her coverage to the Consumer Goods, Oil & Gas and Utilities sectors during the course of her career at WestLB AG and ABN AMRO. She developed a deep understanding of European corporate debt markets as well as corporate strategy, covering a multi-billion Euro bond universe and advising on investment strategy for clients in the US, UK and Continental Europe accordingly.
In 2007, she switched focus to emerging markets and joined the Global Markets team at Standard Bank in London, initially working on the Credit Trading desk as an analyst. She was focused on the Nigerian banking sector, working with Origination and Sales teams to support transactions as well as advising traders. In 2009, she served as part of Stanbic IBTC Bank’s advisory team to the Central Bank of Nigeria during its intervention and reforms amid the Nigerian banking crisis of 2009/10. She became Head of Corporate & Investment Banking Research at Stanbic IBTC Bank, Standard Bank’s Nigerian subsidiary, in May 2010, leading a team of analysts and focusing personally on coverage of the banking sector and then the consumer goods sector. She has extensive experience engaging and advising portfolio investors in debt and equity instruments as well as Foreign Direct Investors into Nigeria from the US, Europe, South Africa and the Middle East.
Adenrele remained at Stanbic IBTC until 29 October 2015 when she took office as Commissioner, Budget & Planning, Ogun State and served until 28 May 2019. As Commissioner, she was responsible for the annual preparation of the state budget of approximately $1bn, and monitoring its execution. She was also responsible for the state’s relationship with development agencies as well as driving the Public Financial Management Reforms of the State Government. She led the Ogun State team that secured $250m of concessionary financing from the World Bank to support its development plan, which was hinged on the Agricultural and Industrial sectors, Skills Development and Governance reforms, fully negotiating the program before leaving office.
Adenrele was appointed as the Independent Non-Executive Director for Rand Merchant Bank Nigeria Stockbrokers in February 2021. She also has a keen interest in Agriculture and organic food production. She enjoys travel, especially in Africa, reading, mentoring young people, exploring African art and craft and is a health and wellness enthusiast.

He also attended Rivers State University of Science and Technology Port Harcourt from where he got his Bachelor of Science (B.Sc.) Management in 1990.

From the same Rivers State University of Science and Technology Port Harcourt, he had his Master of Business Administration (MBA) Management in 2009 and proceeded to obtain Master of Arts in Law and Diplomacy (MALD) in 2013.

He is a Fellow, Chartered Institute of Public Diplomacy and Management.

Onari Brown has a summary of twenty three (23) years of Post Qualification working experience in the Banking, Energy Servicing and Politics/Public Service Sectors. He worked with Oceanic Bank International (Nigeria) Limited various branches across the country in Treasury, Marketing and Operations from 1993 to 2000. He worked with Mipet Services Limited Port Harcourt, as the Head, Personnel/Administration from 2000 to 2004.

He was also a Supervisor, Finance, Budget, Economic Planning, Education and Special Duties in Akuku-Toru Local Government Council, Abonnema 2004 to 2006.

On the Political arena, Onari Brown was a Member Representing Akuku-Toru Constituency 1, in the Rivers State House of Assembly from 2007 to 2015. He served as Chairman and or Member of various Committees, some of which were on, Commission and Agencies, Commerce and Industries, Information and Training, Agriculture and Urban Development.

His Hobbies include Reading, Sports, Nature watching and International Affairs.

His inspiration is Amazing Grace.

Professor Idris Abubakar was born on the 6th of March, 1969 in Misau, Bauchi State. He started his education at the Central Primary School, Misau, Bauchi State in 1975 and continued his Secondary School in Government Comprehensive Secondary School Misau from 1981 to 1984 and proceeded to Government Science Secondary School, Azare for his GCE in 1986. He further attended the Bauchi College of Arts & Science for the IJMB from 1986-1988. Idris Abubakar continued his education at the Ahmadu Bello University, Zaria, Kaduna State, where he obtained his first degree in Civil Engineering in 1993, his Masters degree in the same field in 1999 and concluded his Ph.D. in 2005.

Professor Idris started his career at the Ahmadu Bello University Zaria in 1995 as an Assistant Lecturer, he continued at the same University as Lecturer II in 1999, Lecturer I in 2004 then became a Senior Lecturer in 2007 and Reader in 2010. He became a Professor in 2013.

During his career at the Ahmadu Bello University, Zaria, Professor Idris was Acting Director, Estate Department in 2006. He was Assistant Dean, Faculty of Engineering from 2007 to 2010 and later became the Head of Department of Civil Engineering from 2010 to 2014. He was a member of Presidential Projects’ Assessment Committee from March 2010 to May 2011. He was Director Projects ABUCONS Limited in the Ahmadu Bello University since May, 2016 until his appointment as Executive Director Engineering and Technical Services of the Nigerian Ports Authority.

Professor Idris Abubakar has mentored a lot of people through teaching including the Nigerian Defence Academy during his sabbatical leave from 2014 to 2015 and through direct supervision of Master degree dissertations and Ph.D. theses in his field.  He has examined many Masters Dissertations and Ph.D. theses in other Universities, and has been external examiner to many departments of Civil Engineering of Polytechnics and Universities. He has also been reviewing articles for Publications in both local and international reputable Journals.