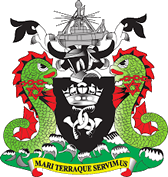 In order to sustain  operational efficiency, the Management of the Nigerian Ports Authority (NPA) has  commissioned a state-of-the-art ultra modern e-Documents Management and Records centre at its Corporate Headquarters in Marina Lagos.

The Acting Managing Director of the Authority, Mohammed Bello Koko who unveiled the ultra modern Records Management and Solution Centre described it as a testament of the Management’s relentless efforts aimed at comprehensively improving the Agency’s position at developing seamless customer based services and operations.

Bello koko stated that in adherence to the Authority’s plan to deploy a 360 degree Document Management solution, management aspires to migrate from physical archiving to digitalization up to work flow via Electronic Documents Management Solution (EDMS) with strategies to localise same at Port locations as functional retention centres.

At the moment the Authority has two other functional retention centres in Apapa and Port harcourt to serve the lagos and eastern ports respectively. This is in addition to another record centre undergoing automation located along the  Apapa port area.

The NPA Acting Managing Director added that the speed and seamless nature of the EDMS in records storage and processing has a bearing on the organization’s desire in achieving customer satisfaction and excellence whilst promoting the Ease of doing Business.

He said: ”In fact this event is very much in synchronization with our drive towards attaining compliance status of the International Organisation for Standardization (ISO).

This he said, includes meeting legal obligations for accurate storage and retrievals” adding that the documents Management Solutions would institute a clear regime of improved accountability and transparency in addition to strengthening our auditing system and training process to world class standard.

The Documents solution centre which is of American model, will not only serve as a source for information storage and retrieval but as a reservoir of data of enduring values.

Bello Koko  further  expressed confidence at the realization of the Authority’s vision of deploying a single window to access records across all Port locations.

While the Documents solution Centre is expected to serve as an antidote to vandalism, theft and arson, the Acting Managing Director In his closing remarks, enjoined all staff of the Authority to take ownership of the facility, reminding them to deepen their maintenance culture while also admonishing them not to let the investment in the project be a wasteful venture.

It is envisaged, that before the end of 2021, the pilot project of the end-to-end documents management solution would have been achieved.