The Managing Director of Nigerian Ports Authority, Hadiza Bala Usman has called on Officers and Men of the Fire Service Department to rededicate themselves to the vision, mission and core values of the Authority by displaying professional ability and agility and demonstrating high sense of responsibility in the discharge of their duties in line with the management thrust of operational efficiency.

She made this call while addressing graduands of Squad 50 of the Fire Service Cadets at their passing out parade at NPA Fire Service Central Training School, Apapa on Wednesday December 12, 2018.

The Representative of the Managing Director, Nigerian Ports Authority (NPA) and the Executive Director, Marine and Operations, Dr. Sokonte Davies (Sitting 5th from left) and other top Management of the Organization after the Passing out ceremony of Squad 50 of the Fire Service Department in Apapa, Lagos today.

‘Nigerian Ports Authority Fire Service Department has a principle of culture and tradition built on excellence which makes it one of the best in the country and you must key in and imbibe this culture while discharging your duties’ Hadiza stated.

The Managing Director further asserted that as a responsive and responsible management, the Authority will continue to give maximum support and cooperation to the Fire Service Department and that Management’s gesture should be reciprocated by the officers by way of dedication to duties.

Represented by the Executive Director, Marine and Operations, Dr Sekonte Huntis Davies, she added that going by the skills demonstrated while performing their drills, management is convinced that the officers have been adequately trained to impact positively on the society. 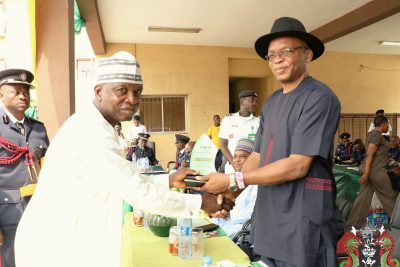 The Representative of the Managing Director, Nigerian Ports Authority (NPA) and the Executive Director, Marine and Operations, Dr. Sokonte H. Davies receives an appreciation award from the General Manager, Health, Safety and Environment (HSE), Engr. Abdulbaki Ishola during the Passing Out Parade of Squad 50 of the Fire Service Department at the Training School in Apapa, Lagos today.

Highlights of the ceremony include the inspection of the parade Guard mounted by the graduands by Dr. Sekonte H Davies and Awards of Appreciation given to the Managing Director but received on her behalf by Dr Sekonte Davies, who was equally given an award.