According to the Managing Director, the use of the FBV in some shallow draught channels would serve as a workable solution for the draught limitations in some channels especially in Calabar and Warri.

She recalled that it was a thing of joy that a flat bottom 200 meter long and 61,000MT heavy vessel FBV, berthed last year in Calabar Port despite the draft limitations of the channel. This, she explained goes to show that such vessels can navigate in such shallow channels.

She therefore appealed to Stakeholders in the nation’s maritime sector, especially those in the shipping sub-sector, to devise ways of collaborating with the Authority to see the presence of more FBV in such channels considering their comparative advantage.

While assuring that the Nigerian Ports Authority (NPA) would be very willing to midwife and facilitate any proposal which would help make the new arrangement possible, Hadiza Bala Usman, expressed the strong conviction that with the cooperation of Stakeholders such as members of the Nigerian Chamber of Shipping and other relevant stakeholders, the proposal on the FBV is realisable.

The Managing Director who was speaking in Lagos yesterday when she received members of the Nigerian Chamber of Shipping, led by its President, Mr Andy Isichei assured that the Authority would be willing to work with the chamber for the mutual benefit of both parties.

Earlier, the President of the Chamber, Mr Andy Isichei had told the Managing Director that the shallowness of some sections of the channels is of concern to members of the Chamber and said the FBV should be encouraged in such channels.

Meanwhile, the NPA has reiterated that it shall continue to accord priority attention to suggestions and recommendations from stakeholders in the nation’s maritime sector in the overall interest of the sector.

Furthermore, Hadiza Usman gave the assurance when she received members of the Maritime Arbitrators Association of Nigeria (MAAN) who paid her a courtesy call in her office in Lagos yesterday. 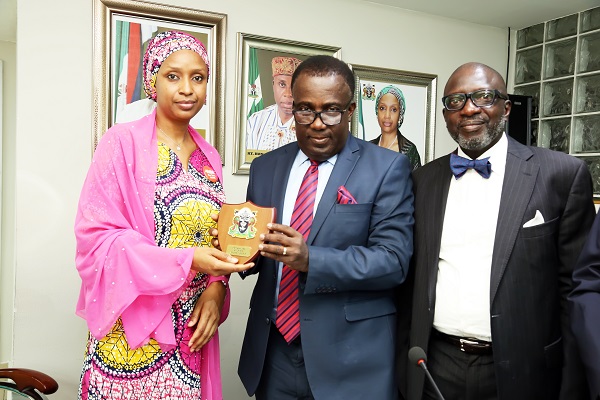 The Managing Director of the Nigerian Ports Authority (NPA), Hadiza Bala Usman presents a plaque to the President of Maritime Arbitrators Association of Nigeria (MAAN), Adewale Jones. To his left is the Vice President of MAAN, Bodunrin Adewole, when the Executives of MAAN paid a courtesy visit to the MD at the NPA Corporate Headquarters in Marina, Lagos.

While urging stakeholders to come forward with useful suggestions on critical areas of the Authority’s operations, the Managing Director reiterated that the Management of the Authority shall consider such submissions on their merits, and within budgetary provisions.

Hadiza Bala Usman called for a more elaborate effort amongst stakeholders in the maritime sector, through collaboration on specific workable areas and joint partnership.

She assured members of the Maritime Arbitrators Association of Nigeria (MAAN) of the willingness of the Authority to partner with the Association especially in the areas of capacity building, technical support and arbitration and expressed strong optimism that the relationship between the two would be of mutual benefit to the parties.

Earlier, MAAN President, Barrister Adewale Jones had appealed for greater collaboration between the Association and the Authority, while at the same time commending the Management of the Organisation for its bold step, which he described as germane to the growth and development of the nation’s economy.